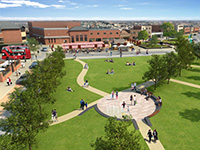 Rediscover Mitcham was a multi-million pound project to create an attractive town centre to be proud of.

The project comprised a number of public realm and transport proposals aimed at revitalising the Fair Green and surrounding streets.

For news about the project see below and check the News Room.

Construction progress is on schedule at the remaining Phase 5 section of the project Western Rd/Holborn Way/Raleigh Gardens/Upper Green West. The majority of the work will be completed before Christmas. Just minor works and snagging will resume in January 2017, with an aim for full completion by the end of that month.

Some critical works with road closures and diversions will take place before Christmas. These include the following:

27 Nov 2017 – Between 9pm and 4am – Closure to the Fair Green perimeter road, Upper Green and East. This is necessary for reversing the traffic flow.

4 – 8 Dec 2017 – Between 9pm and 4am – Multiple road closures with traffic diversions at the junction with Western Rd/Holborn Way/Raleigh Gardens/Upper Green West – Required for the carriageway resurfacing.

The new bus street and perimeter road will shortly be legally restricted to a 20 mph speed limit. Signage will be in place to advise drivers of this limit, which will be actively enforced by the Met Police.

We are pleased to announce that TfL and London Buses have agreed to commence the operation of buses through the new London Rd bus street starting on Saturday 26 August 2017. Details of the changes will be displayed within the affected bus stops, with public information also available on TfL’s website.

Only local buses and cycles will be permitted to use the new bus street and its dedicated access route at any time. Unauthorised vehicles i.e. non-emergency or non-essential service vehicles will be subject to fines.

Construction work on Phase 5 at the signalised junction with Holborn Way and Western Road/Raleigh Gardens is now underway as the last phase of construction until Dec 2017, with minor touches and full completion to be carried out in Jan 2018.

Once this junction is completed, all the new signalised junctions in the area will be linked, allowing traffic movements in the town centre to be optimised.

Carriageway re-surfacing of Phases 2 and 4, which includes parts of Holborn Way, London Road and St Marks Avenue, will be carried out between 24 to 27 July 2017. See letter to residents and businesses.

The gas main replacement by Southern Gas Networks currently taking place in London Road, is scheduled for completion on 22 July 2017. We understand and accept the residents’ and business’s frustration with the works, which unfortunately is out of Merton’s control. However SGN are making every effort to complete the job as urgently and efficiently as possible. Phase 5 works at the junction with Holborn Way and Western Road/Raleigh Gardens starts at the end of the July. This will include the placing of all existing traffic signals into temporary blocks to accommodate clearance of the islands and to make way for the new kerbs and pavements. See earlier updates with the relevant plans.

Resurfacing of Phase 3, between the junction with Upper Green West and East / London Rd / Raleigh Gardens was successfully completed in April adding a major improvement to the area.

Work at the junction with Holborn Way / St Marks Rd, Phase 4, is ahead of schedule with the new traffic signals to be switched on next week.

The remaining sections of this phase along both sides of Holborn Way up to the junction with Western Road will be under construction in multiple stages until July 2017.

The new bus street through the green, Phase 2, is almost complete. This new road will be closed to buses until they are all re-routed in August 2017. The exact time / date will be confirmed 6-8 weeks before the intended opening, only once all the bus tests have been carried out.

Work has started at the junction with Holborn Way / St Marks Rd, Phase 4, with construction of the new pedestrian and traffic islands. These new traffic lights are expected to be installed and commissioned by June 2017.

Phase 3, junction with Upper Green West and East / London Rd is nearing completion and the final stage of re-surfacing the carriageway will be taking place in 4 stages, between 3 and 13 April 2017.

Letter to residents and business in the vicinity of the works

This work will be carried out in the evenings and early mornings, between 9pm and 4am. Temporary road closures and traffic diversions including re-routing local buses will be in operation.

The details of the temporary road closures and diversions have been advertised, see the following web link,

Construction has resumed in earnest with work concentrated at the junction with London Road and Upper Green West / East, designated as the construction Phase 3.

The new bus street and footways in London Road, between the Kings Arms and St Marks Road, Phase 2, are almost complete with the majority of the barriers and fencing removed before Christmas last year as promised. The final layer of tarmac will be applied in this road in the summer closer to the planned opening of the route to buses and cyclist in September 2017. Excavation works have just started at the junction with Holborn Way and St Marks, Phase 4, with its essential completion in time for the opening of the new bus route.

Overall, we are pleased that we are running to schedule, despite some disruption and delay towards the end of January due to freezing temperatures not suitable for certain construction activities.

The construction works in Mitcham are progressing well, with no major delays to the project expected at present. The collapsed sewer in Upper Green East did however cause some considerable traffic congestion until it was repaired and prevented us from completing our works at that corner.

We are pleased that the majority of the footways along the new bus street in London Road between Fair Green and Holborn Way has been cleared of barriers and fencing before Christmas as promised. An unfortunate leak to a water main occurred immediately after the new road got its first layer of tarmac, which delayed things a bit but has since been repaired by Thames Water.

The last day of work in the area will be on 23 December with workers returning on 3 January 2017. Merton would like to thank the Mitcham community for your support and patience and wish you all a Merry Christmas and a happy New Year.

We are pleased to report that the construction progress on Phases 2 and 3 is on track despite alterations to the structural design of the new bus street due to some areas with problematic ground conditions.

According to the works programme, we hope to substantially complete Phase 2 (being the bus street through the green) before Christmas, with new footways installed and removal of the majority of the protective fencing along the shop frontages. Full completion of Phase 2, is expected in April 2017.

The bus street will only be in full use by buses and cyclists come September 2017 once the southern and northern junctions are completed, although it will be fully accessible to pedestrians as from April 2017. Full construction of Phase 3 (junction with London Rd and Upper Green West/East) is expected earlier in Feb 2017.

At the start of the project the route 200 bus service was terminated at Lower Green West before entering the town centre. However, due to public concern, this was altered and now continues through to St Marks Road, where it terminates. See the TfL link below.

Merton council would like to thank the Mitcham community for their ongoing support and patience.

All TfL approvals have now been granted for the commencement of works for the remaining phases of the project.

The Cabinet Member for Regeneration, Environment and Housing has also resolved and agreed to proceed with the making of the relevant TMOs following the statutory advertisement in April 2016. See the following link to the report and decision sheet.

Works therefore start on 25 July 2016 and will be carried out in separate phases until full completion expected by 31 Jan 2018.

These phases are shown on a plan, see following link

The details of the constructions arrangements and who to contact once the works have started are provided on this letter, see following link, which will be posted to all properties in the vicinity of the works.

In conjunction, TfL will also be engaging with the public and its bus users regarding the temporary arrangements to bus services both during construction and once the project is complete.

Their changes to the bus routes and stops can be seen on the TfL webpage, see following link

Merton council would like to thank the Mitcham community for their ongoing support and patience.

A Statutory Notice of Intent for the relevant Traffic Management Orders pertaining to the operation of the ‘Rediscover Mitcham’ Project, has been placed in the local Newspaper and London Gazette, including notices erected on street in the Mitcham Town Centre area. To view an electronic copy of the Notice click the following link.

Any person desiring to comment on the proposed Orders of the proposed raised junction tables should send a statement in writing of their representations or objections and the grounds thereof, to the Environment and Regeneration Department at the Merton Civic Centre, London Road, Morden, Surrey, SM4 5DX, or alternatively by email to trafficandhighways@merton.gov.uk quoting reference ES/REDISCOVER MITCHAM, no later than 13 May 2016.

See the following link to view the General Arrangement plan of the proposals.

General Arrangement plan of the proposals

The final decision by TfL on whether or not to proceed with the remaining phases of the project, which includes significant changes to the surrounding junctions and the introduction of the Bus Street, will be made by their Surface Board towards the end of March 2016. If full approval is given without any changes to the design, works could be expected to start as soon as July 2016.

Works are running smoothly with a noticeable change with pedestrian already using certain completed parts. Completion is anticipated in April.

Maintenance, refurbishment and environmental improvements to improve the structural aspects, water quality and bio diversity of the pond and its surroundings will start on week commencing 14 March 2016 and will last approximately 10-12 weeks.

Letter to businesses and residents affected by the work, 24 February 2016