Morden has been identified as one of the major growth and housing opportunity areas in south west London by the Mayor of London, Transport for London (TfL) and Merton Council.

Morden is changing. There are more young people, the population is becoming more diverse and the number of people working in Morden has increased. Morden benefits from great transport links, parks and open spaces, however through our recent consultations you have told us that the town centre does not currently offer residents and visitors what they need. 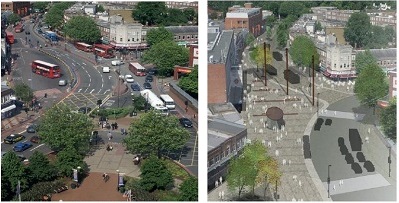 TfL entry and exit records indicate that in 2017 there were approximately 10.41 million journeys through Morden underground station. The presence of such a large number of commuters, employees and residents should benefit the town centre, however through our consultation process you have told us that Morden is not an attractive town centre to enjoy and has the potential to be better.

The vision, as confirmed by the results of the most recent public consultation is simply, to make more of Morden.

How we got here

The information below outlines the steps that have been taken to ensure that Morden town centre remains at the forefront of regeneration.

Between 13 November 2020 and 1 February 2021, the new Merton draft Local Plan Stage 2a is being consulted on. The Local Plan is a document which provides a sound basis for planning decisions. The draft Local Plan includes a policy on Morden, supporting the rejuvenation of the town centre to create a modern, attractive and vibrant destination that meets the needs of the current and future residents, businesses and visitors, and provides economic, social and environmental benefits.


The following documents have been published alongside the new draft Local Plan, which have informed the draft Morden policy:

These documents can be viewed on the Local Plan Research webpage.

The map of the proposed Morden Regeneration Zone Mo4 Site Allocation is shown below. 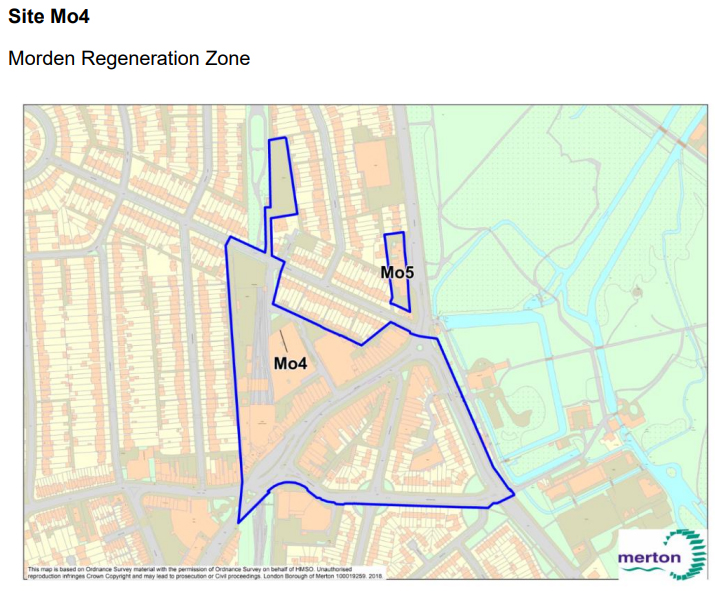 By January 2019 local residents, businesses, landowners and others were asked for their views on the new draft planning policy for Morden and the potential site for comprehensive redevelopment at the heart of Morden town centre, identified as the Morden Regeneration Zone. Policy N3.3 in stage 2 of Merton's emerging Local Plan is to help deliver the rejuvenation of Morden. It also described what would be expected for investment in shops, services, healthy streets and the public realm and homes throughout the town centre and surrounds. Stage 2 consultation finished in early 2019; the draft plan and the responses to them are available via Merton's Local Plan 2020 stage.

In 2018 and 2019 we consulted through pop-up events and local school engagement.  The results of this engagement can be downloaded here.

Between October 2018 and January 2019 Transport for London consulted on proposals for a new, direct and quicker transport link between Sutton and Merton, called the Sutton Link. One of the three proposed routes runs along the edge of Morden town centre. For further information on the three routes in Merton and the results of the 2019 consultation, please visit the TfL webpage.

In mid-2017 the council and TfL jointly procured and appointed consultants to provide advice on the delivery options for the Housing Zone. The consultant's detailed delivery advice was reviewed and a report on the Morden town centre regeneration was considered by Cabinet in January 2018 with recommendations made for the next stages of the project. This report highlights the partnership between the council and TfL and the joint vision for Morden.

We have also been working hard in securing a number of funding bids for the town centre regeneration and will provide updates on this in future newsletters.

Between September and November 2015 the council launched a public consultation asking whether you still agreed with the matters that informed the adopted 2009 vision for Morden town centre. A draft consultation boundary was proposed and can be viewed through the links below:

More than 1,000 responses were received as part of the consultation, providing views on a range of issues including the best things about Morden, improvements needed, positive elements, the draft consultation boundary, public realm, car parking, town centre facilities, leisure facilities and public toilets. For further details, refer to the Morden consultation autumn 2015 - original responses and the summarised statement of consultation.

In 2015, TfL identified the Morden underground station site as one of its priority development sites. This site was then included in the joint bid by the council and TfL to the GLA for part of Morden town centre to be designated as a Housing Zone.

Morden's Housing Zone status was confirmed by the Mayor of London in October 2015.

Adoption of the Sites and Policies Plan (2014)

Following four rounds of public consultation and an independent planning inspector examination, the Merton Sites and Policies Plan and Policies Map was adopted by the council in July 2014.

This document contains the detailed planning policies to guide the assessment of planning applications throughout Merton and allocates various sites within the borough that have been identified for redevelopment up until 2024. Four of the allocated sites fall within the Morden Housing Zone boundary:

Once the property market began to recover from the recession, the council worked closely with TfL to assess potentially viable redevelopment scenarios for the Morden station site. This is the area covering Morden underground and bus stations and the Kenley Road carpark. In October and November 2013 public consultation was carried out on the draft Morden Station planning brief.

General support was received as part of this consultation that the development of the station site could be the catalyst for change and regeneration throughout the rest of the town centre.

The following key issues were identified as part of the consultation process and were addressed in the final brief:

The Morden Station planning brief was adopted in March 2014 as a Supplementary Planning Document (SPD) to the Core Strategy.

In July 2011, our Core Strategy was adopted, which incorporates regeneration policies for Morden into Policy CS3 Morden Town Centre and identifies a housing target in Policy CS9 Housing Provision of 1450 – 1800 homes to be delivered in Morden during the period 2011 to 2026.

Following on from responses to the Local Development Framework (LDF) in 2006 and 2007 which told us that you wanted to regenerate Morden to have better shopping and leisure facilities, a draft vision began to take shape.

In June 2008, the draft vision for Morden town centre was endorsed for consultation by the council providing an initial regeneration strategy and taking a step towards establishing a shared vision for the future of Morden.

In 2008 and 2009, we undertook a major consultation exercise called 'moreMorden' seeking the views of local residents, businesses, commuters and other stakeholders on the opportunities for regenerating Morden town centre.

In March 2009 the Vision for Morden was formally adopted by the council. However the timing of this strategy alongside the recession meant that there was significantly less interest in such a substantial regeneration project and unfortunately it did not progress as intended.

We continue to work closely with TfL and are in the final stages of preparing the necessary documents that are needed to procure a third party development partner to help deliver our vision for Morden.

Anyone wishing to be notified of updates on the Morden regeneration can sign up to receive the moreMorden newsletters using the form below.

We are now publishing digital newsletters to provide regular updates on the Morden Housing Zone.

The previous newsletters can be viewed below: