Merton has been a Fairtrade Borough since February 2009, which means we have met five goals set by the Fairtrade Foundation.

During this year's Fairtrade Fortnight 25 February – 10 March, the focus was on the people - in particular the women - who grow the cocoa in our chocolate. £1.86* is the amount a cocoa farmer in West Africa needs to earn each day in order to achieve a living income. Currently, a typical cocoa farmer in Cote d'Ivoire lives on around 74p** a day. Almost all cocoa farmers in West Africa live in poverty.  Please follow Fairtrade Merton and the Fairtrade Foundation on social media and like, comment and share our posts to support the Fairtrade mission and make a difference to the cocoa farmers lives. 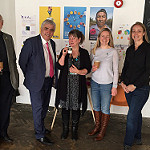 This Fairtrade Fortnight when you take your lunch or coffee break, we are asking you to think about the consequences of not buying Fairtrade products. Farmers across the globe are being exploited and forced to live in poverty. But you can change their story by buying Fairtrade.

Tariro coffee shop are hosting a Fairtrade Break in the Crown House Creative, 102 London Road, Morden, SM4 4AY on Tuesday 7 March from 11.00 - 13.30. There will be Fairtrade goodies available to buy and also some freebies! So why not take your break there and show your support and commitment to Fairtrade.

The Crown House Creative was decorated for Fairtrade Fortnight with posters designed by children from St John Fisher school.

Patrick Say, Digital Manager at the Fairtrade Foundation, has written a blog to dispel some of the myths surrounding Fairtrade, including the perennial question – Are Fairtrade products more expensive than non-Fairtrade? Read the blog here: The Six Things People Get Wrong about Fairtrade.

Following last year's success, members of the Fairtrade Merton steering group were out and about at Wimbledon Village Fair giving out Fairtrade bananas. The aim was to promote how Fairtrade helps support farmers through trade rather than aid. The bananas had been donated by Sainsbury's (Morden and Colliers Wood SavaCentre), The Co-op (Grand Drive), Morrisons (Wimbledon) and Waitrose (Raynes Park) - so a big thank you for their generous support. Over 1,000 bananas were given out on the day, proving very popular with the children! Lots of people confirmed their continued support to buying Fairtrade products, demonstrating that for many people in the borough their commitment to Fairtrade is part of their daily lives.

This weekend, 14 and 15 May, Fairtrade International are running a 'World Fairtrade Challenge'. The aim is to drink as many cups of Fairtrade coffee as possible in support of coffee farmers. 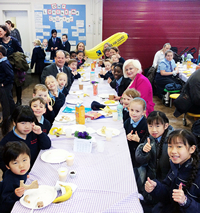 There was a host of events throughout the borough to celebrate Fairtrade Fortnight 'sit down for breakfast, stand up for farmers', where people chose Fairtrade products for their breakfast to support a fairer deal for farmers and workers.

The Merton Food Charter has now been finalised and is the starting point to encourage organisations and individuals across Merton to work together and make the most of our local food resources including Fairtrade products. 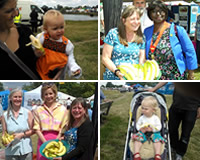 Members of the Fairtrade Merton steering group were out and about in the sunshine on Saturday giving out Fairtrade bananas to anyone who wanted one! The aim was to promote how Fairtrade helps support farmers through trade rather than aid. The bananas had been generously donated by Tesco (New Malden), Sainsbury's (Morden) and Waitrose (Raynes Park). In total over 1,000 bananas were given out on the day, including one to Darcey Bussell who opened the Fair.

Fairtrade Merton have successfully retained Fairtrade status for the borough for the next two years. Some of the achievements that have helped ensure continuing Fairtrade status including the council passing a new Fairtrade resolution, Poplar primary school now having a Fairtrade option for it's school uniform and the steering group regular promoting Fairtrade at community events. 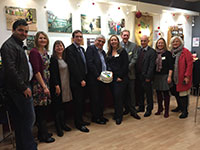 Fairtrade Merton hosted an event in December 2014 to celebrate five years as a Fairtrade Borough. The steering group would like to thank those that attended the event and also Sainsbury's and the Co-op, who kindly donated some Fairtrade wine to the event.

Fairtrade Merton had a fabulous day in the sunshine at Wimbledon Village Fair, giving out free raffle tickets for a wonderful prize donated by Divine Chocolate. The prize was a gift box containing various Divine goodies, including a Wimbledon-inspired strawberries and cream chocolate.

Fairtrade Merton kicked of Fairtrade Fortnight in style, hosting a visit from Alexis Martinez, a Colombian banana producer.  Alexis gave a lively presentation to the children of St John Fisher Primary School, where he explained the benefits of Fairtrade to his community, including being able to build a school for local children to study in.

Morden Baptist Church are hosting a Fairtrade Christmas Fair on Saturday 30 November 2013. Details can be found on the council's event calendar.

Fairtrade Merton were pleased to attend an event in October 2013 to celebrate 5 years of Fairtrade London.

Despite the windy weather, there was strong support for Fairtrade at the Wimbledon Village Fair. The Co-op kindly donated Fairtrade goodies which were given away in a free raffle.

As the British public gears up to buy 90 million chocolate eggs this Easter, the Fairtrade Foundation is issuing a stark reminder that millions struggle to provide our annual chocolate bonanza. Fifty million people who depend on growing cocoa for their livelihoods – especially in West Africa – have to survive on $2 a day or less says the Foundation. So this Easter, why not pledge to buy Fairtrade Easter eggs and other treats from the Fairtrade stockists in the borough and help make a difference to the lives of cocoa workers and farmers.

You’ll be joining thousands of others all over the UK when you take a step for Fairtrade. Make it as inventive, daring, funny or messy as you like. Every step counts for millions of farmers, workers and their communities in developing countries who urgently need a better deal from trade.

For more details or for a pledge, go to the Fairtrade Foundation website. Pledges are also available in a number of locations throughout the borough, including Morden library, Merton civic centre reception and coffee shop.

This Christmas why not consider buying presents, cards and decorations that are Fairtrade or ethically sourced? There are many Fairtrade stockists in the borough and the range of competitively priced Fairtrade goods has increased dramatically and now includes wine, clothing and even Christmas puddings. You can find details of Fairtrade products on the Fairtrade Foundation website and there are many websites giving details of where you can buy ethically sourced goods.

Fairtrade Fortnight ran from 28 February to 13 March 2011 and people were encouraged to show their support for Fairtrade by designing bunting (Fairtrade cotton of course) and participate in the successful world record attempt for the longest line of bunting - an amazing 3.4 kilometres long. There was a fantastic array of bunting designed by Merton schoolchildren and residents, including some AFC Wimbledon bunting!

The 'five goals' for Fairtrade boroughs

The Fairtrade Mark is an independent consumer label that appears on products as a guarantee that disadvantaged producers in the developing world are getting a better deal. They receive a minimum price, which covers the costs of sustainable production and includes a premium that enables them to support their families and invest in social and economic development projects. This helps to provide decent working conditions, local sustainability and fair terms of trade. Fairtrade guarantees producers a stable stream of income in fluctuating world markets and gives them greater control over their livelihoods.

We can make a positive impact as residents, businesses, community groups and retailers in Merton, by simply choosing to purchase and use Fairtrade products.

The range of Fairtrade products available is huge and includes everything from fruit and vegetables, to tea and coffee, to wine and beer, clothing and sports balls.

Caroline Katiyo, founding member of Tariro Fairtrade Coffee House, Morden, and Ruth Merriman, a community worker employed by Morden Baptist Church, launched Fairtrade Merton in September 2005. Their vision was to encourage residents, businesses, consumers and community groups of the borough to make small changes in their choices and purchasing of goods that would greatly benefit the lives of producers working in poorer area of the world.

If you would like to find out more about Fairtade within Merton or would like to consider joining the Fairtrade Merton steering group then please contact Fairtrademerton@hotmail.co.uk

Fairtrade is also about local sustainability in the developing world and is the only certification model that guarantees prices to farmers that meet strict social and environmental sustainability criteria. Merton's Climate Change strategy actively supports Fairtrade.